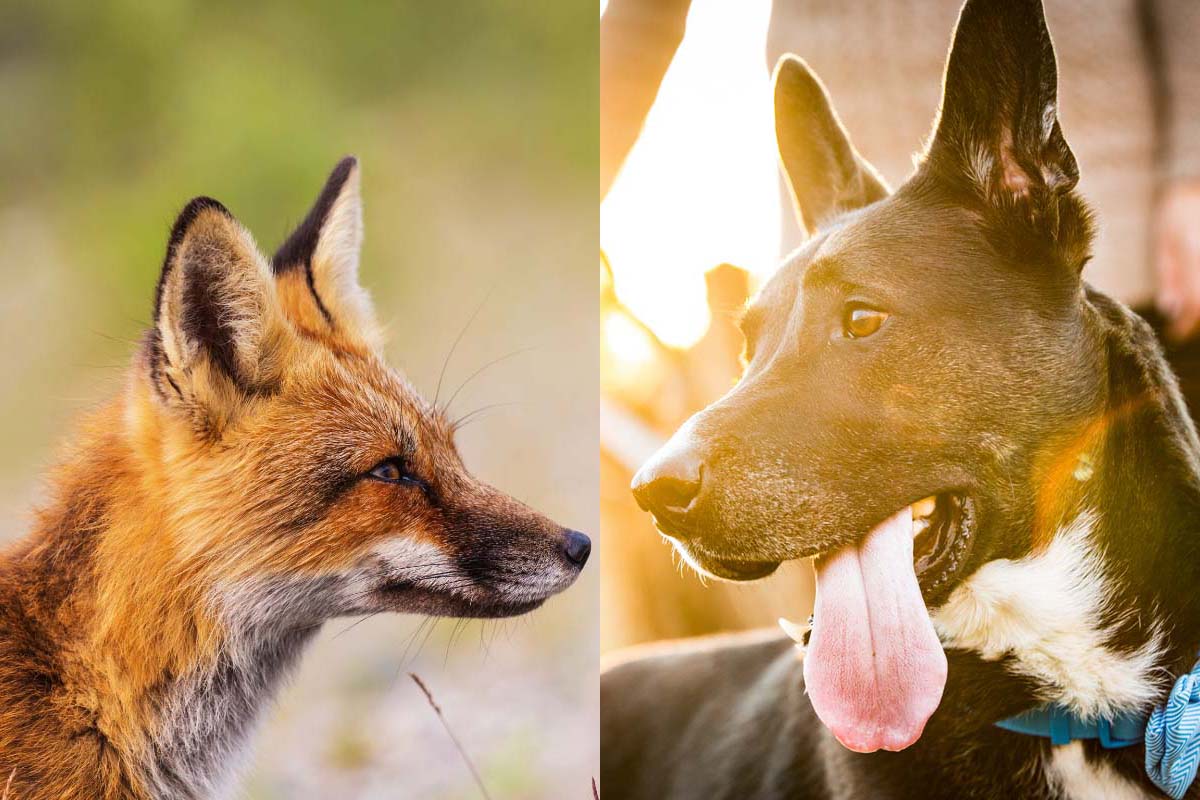 There seems to be a lot of confusion behind whether or not, a fox can breed with a dog. The two are related by the Canidae family.

Contents show
1 Watch the Video for Can Foxes Breed with Dogs
2 The Canidae Family
3 Are Fox Dog Hybrids Real?
4 Are Chihuahuas Related to Fennec Foxes?
5 The Science Behind It
6 The Biology Behind It
7 Frequently Asked Questions
7.1 Can a fox breed with a coyote?
7.2 Could this information change with more data?
7.3 Can a fox breed with a cat?
7.4 Do foxes and dogs get along?

However, we intend to clear up any misconceptions, by answering absolutely, can foxes breed with dogs?

A fox cannot breed with a dog. They do not share a compatible number of chromosome pairs, or genetic materials needed to interbreed. Science has not documented a single case of hybridization between a fox and a dog.

A lot of times people jump to conclusions. Especially when there is not enough data to support a claim.

Watch the Video for Can Foxes Breed with Dogs

There is a lot of false, or inaccurate information out there, so we are going to break down exactly why a fox cannot breed with a dog.

Our conclusion is based on scientific information and data that we have collected. Look to the bottom of this article for our references and sources.

The fox is related to dogs through the Canidae family. Both the dog and the fox are related to wolves through this same scientific family.

The difference between the two is that the fox diverged from the wolf lineage 12 million years ago.

Dogs diverged from the wolf lineage around 40,000 years ago.

This is why foxes are so different, genetically, from their other Canidae family members.

Dogs were domesticated around 30,000 years ago. Most scientists agree that the dog’s closest relative is the modern-day gray wolf.

Many of the differences in genetics between foxes and dogs, has a lot to do with the geographical territories that they come from.

The fox is the most widely dispersed member of the Canidae family. Their lineages come from multiple continents and regions.

Dogs have also become widely dispersed throughout the world, but for different reasons. That being domestication.

Wolves and dogs share a lot of the same genetics because of their close relationship with each other.

This is why hybridization is possible between these more closely related canids.

Foxes, on the other hand, have evolved through a longer period, into a  completely separate genus. This makes their genetics very different than their canine cousins.

The theory of fox dog hybrids is considered an alternative theory of evolution and is not accepted by the scientific community as clear evidence.

The accounts that do exist of there being a hybridization between foxes and dogs come from the 1800s to early 1900s.

A few to mention being:

Of these cases, none of them were scientifically verified or studied.

Some of them may have even been proven to be fake assumptions, based on an internet website ran by a cryptozoologist.

The strange fact is, there has been some interbreeding in species, that produced hybrid offspring, such as with horses and donkeys, to create a mule.

There is also mention of these occurrences in ancient texts, such as texts written by Aristotle, and those found in Akkadian literature.

Some of these accounts may have been considered “jumping to conclusions” for their lack of data and scientific study.

Because of these old accounts, there has been a term coined for these supposed dog fox hybrids, calling them “doxes, or a dox.”

The idea is popular on the internet, however, with uncredible sources.

The fact is, the idea might be romantic to some, but not factual.

Are Chihuahuas Related to Fennec Foxes?

There is a rumor that chihuahuas are related to fennec foxes. This is mostly thought to be true because of similarities in their appearance.

Just like with doxes, there is no scientific data to back up this claim.

The two animals do not share the same genus and have too many genetic differences.

It is also a geographical improbability since the fennec fox comes from Africa, and the chihuahua comes from Mexico.

There was originally some confusion with fennec foxes, as to whether they were part of the true fox genus of Vulpes.

They seemed to have a lot in common with other fox species.

It wasn’t until more data on them became available that they eventually were classified as a fox, in the Vulpes genus.

Either way, the genetic material of the Chihuahua, would not be compatible with that of a fennec fox.

The Science Behind It

The scientific data that does exist on genetics, genomes, and chromosomes, should clear up any doubt that may still exist.

Wolves, coyotes, dingos, jackals, and domestic dogs, all have the same count of 78 chromosomes, in 39 pairs.

This is the key to why they can interbreed, to create hybrid canids.

Foxes have an incompatible number of chromosomes and genetic material to interbreed with a dog.

The Vulpes genus of foxes has around 38 chromosomes, except for the fennec fox, who has 64.

This makes them unable to breed with a dog, for the lack of compatibility in genus, DNA, and genetics.

For two species to create offspring together, they have to at the very least be the same genus.

Foxes evolved into their own genus after they diverged from wolves millions of years ago.

Likewise, for two species to breed, there must be compatible gametes with equal parts of genetic material.

The Biology Behind It

In biology, gametes are sex/reproductive cells, that contains half of the genetic material used to complete an organism.

In the case of the mule, both the horse and the donkey are of the same genus.

There just aren’t enough compatible pairs of chromosomes in foxes and dogs to interbreed.

With this, science proves that breeding between a dog and a fox would be considered impossible.

There has been no proven account of a “dox” that has been verified by the scientific community or brought forth to be studied.

And that is the real truth behind the questions: Can foxes breed with dogs?

No, they can not.

If you found this article helpful and would like to learn more, join our tribe! Sign up on the form to the right, or at the bottom of this article for updates!

Also if you love fox stuff, check out our fox collectibles.

Can a fox breed with a coyote?

No. These two animals are a completely different genus and are not closely enough related to interbreed. Just like with dogs, coyotes are more closely related to wolves than foxes.

Could this information change with more data?

As noted in this article, there have been some rare occasions that two different species have interbred. However, the science we have now suggests that it could not happen between a dog and a fox.

Can a fox breed with a cat?

Foxes exhibit a lot of cat-like behaviors and appearances, but the two cannot interbreed. This is due to the same scientific data suggested in this article.

Do foxes and dogs get along?

Wild foxes would most likely not get along with dogs since they are not both tamed. But foxes that have been raised as pets and tamed, to some degree, do seem to get along with other animals including dogs.